Breaking the Poverty Cycle One Belt at a Time: Misha - Mission Belt

Breaking the Poverty Cycle One Belt at a Time: Misha 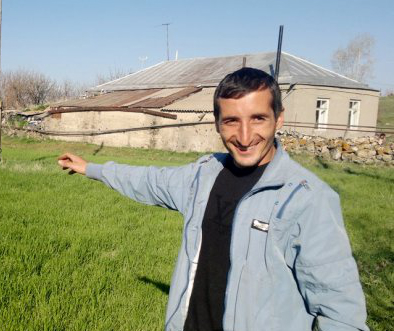 Armenia is a country approximately the size of Maryland where one-third of the population lives below the poverty line. Much of the population earns their income as subsistence farmers growing only slightly more than their needs in order to sell the surplus. Misha is a 26 year old from the Tsovazard village in Gavar, Armenia. He currently lives with his parents, wife and one-year-old son. Prior to the birth of the their son, Misha’s wife worked as a dental technician but has since stopped to take care of their son. His mother is retired and his father continues working abroad for the Russian Federation. Misha has no higher education but worked for several years at a local lemonade factory. He has since found himself unemployed and turned to farming and agriculture to provide for his family.

Misha currently owns a private plot of land where he keeps three cows, one bull, three calves, six pigs and ten piglets. His mother - who has vast experience in farming - has been passing on what knowledge she can to her son to give him the best opportunity for success and to help him become the provider he wants to be. To further bolster his productivity, Misha requested a loan of $2,400 USD to buy a hay mowing machine. That loan was fully funded and currently he is well on his way to paying it back and making that money available to other striving entrepreneurs.

Thank you all for being part of his success by being a part of the Mission. We’re breaking the poverty cycle one belt at a time!

You can follow up on Misha’s story and learn about other people that have been funded by the Mission Belt family on the Kiva website.


The Mission Belt Co. – Breaking the poverty cycle one belt at a time.


Kiva is an easily accessible platform that helps connect hard working people with a hand up and a small loan. Because the loans are interest free and 98% of them are repaid, the $1 from your Mission Belt purchase could be used to help hundreds of people invest in their dreams and help end the poverty cycle. They really are small loans that change lives.